IN FOCUS: Gaston Chee speaks at the China International Import Expo (CIIE) and the West Lake Dialogue in Hangzhou 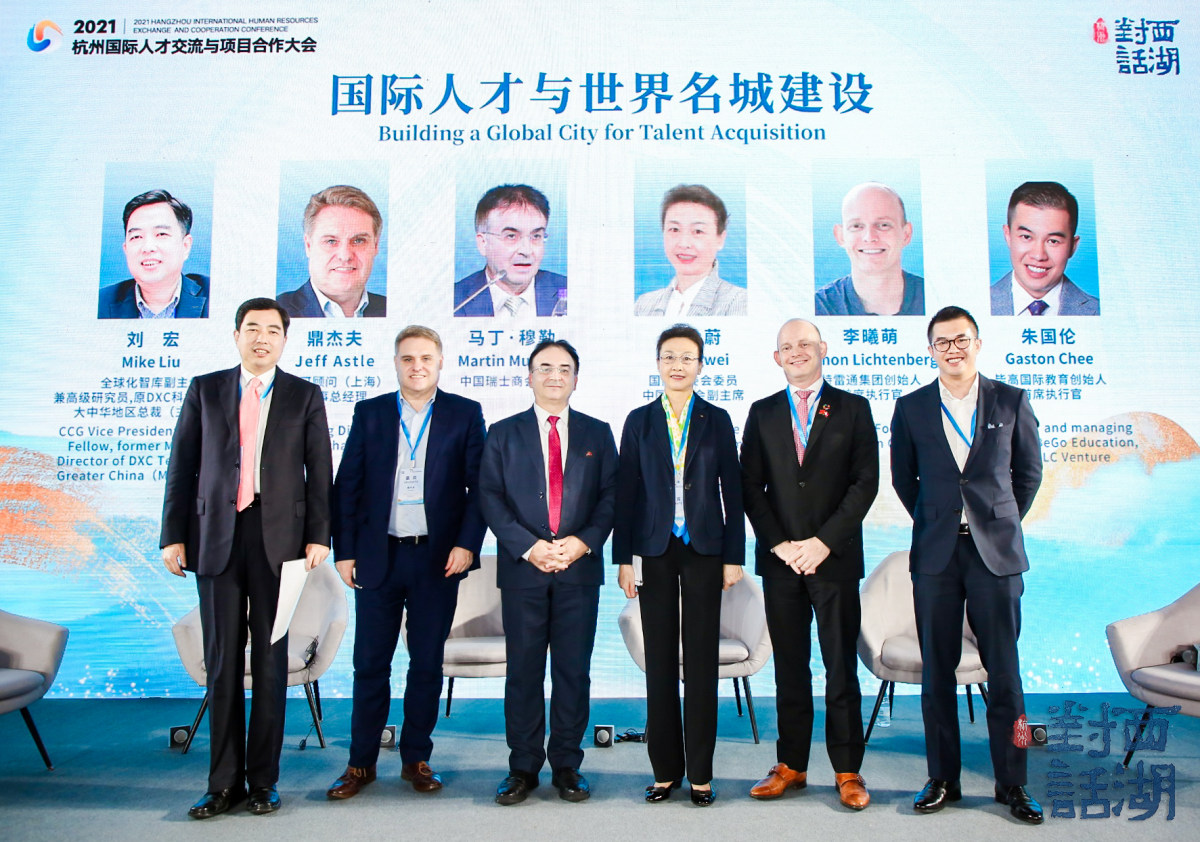 Gaston Chee had spoken back to back at the Fourth Hongqiao International China International Import Expo (CIIE) held on the 5th of November in Shanghai and the West Lake Dialogue held from the 6th to the 8th of November at the former G20 Summit grounds in Hangzhou. The two dialogues were co-organised and/or sponsored by the Center for China and Globalization (CCG) in cooperation with the local municipal governments of Shanghai and Zhejiang and government agencies that include the China Center for International Economic Exchange. Gaston was invited to the events as part of a tour organized for the rising Global Young Leaders Dialogue (GYLD) network, a joint initiative of the Center for China and Globalization (CCG) and the Academy of Contemporary China and World Studies (ACCWS) aimed at building a world’s global young leaders’ program that emphasizes shared values such as open and equal dialogue, intellectual exchange, inclusive and mutual learning. The speaking engagement also included a round-table discussion held at Tonglu County, a prefecture to the east of the city of Hangzhou. These high profile events were organized around China’s unique and growing role in global leadership and opportunities.

The International China International Import Expo (CIIE) was launched by President Xi Jinping when it was first announced during the Belt and Road Forum for International Cooperation that China in 2017. Now on its fourth term, the CIIE is organized by the China Center for International Economic Exchange (CCIEE), Academy of Contemporary China and World Studies, Chongyang Institute for Financial Studies, Center for China and Globalization (CCG), Renmin University and the Chinese global news network, CGTN. 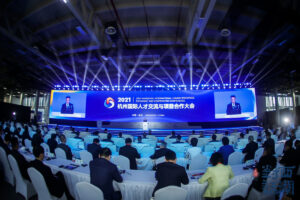 The CIIE is seen as a significant move for the Chinese government to give firm support to trade liberalization and economic globalization and actively open the Chinese market to the world and brings together government officials, business communities, exhibitors and professional purchasers across the world to facilitate strong economic cooperation and trade with China promoting global trade and world economic growth to make the world economy more open as what is termed as “a new era of shared future”.

The event was hosted by the State Council Information Office of the PRC and Gaston joined the parallel session on the role of young professionals in improving global governance. During the session, Gaston spoke on the importance of education as a facilitator of cross-cultural education in cross-cultural communication and the positive significance of cultural exchange for global governance practices among young and rising leaders.

Gaston referenced his international education experiences in the UK and his multinational roots and said that the exposure to such diverse cultures and experiences has made him a better communicator and a better leader. He also said that the same of true for China. “Due to the country’s open and welcoming practices, the demographics of this student body is so diverse creating an excellent opportunity to create a unique opportunity for exchange of ideas and the cultivation of a truly global perspective leadership.” China is home to almost half a million foreign students studying in China, ranking third in the international body of students, following the US and UK.

Gaston also referenced the bilingual and multicultural work environment of BeGo Education, one of the investment portfolios of LC Venture where Gaston is the co-founder and CEO. He says the diverse body of staff where every continent is represented was made possible by China’s commitment to creating an enabling environment for international students for career development in the context of the country’s plans.

During the sessions, Gaston was joined by an excellent list of young leaders in China who are in China for their tertiary studies or have founded businesses following their successful completion of higher education in Chinese universities. The parallel session was moderated by SUN Ming, Vice President of the Academy of Contemporary China and World Studies (ACCWS).

Gaston Chee was also among the speakers at the West Lake Dialogue, a flagship international forum on global talent organised by the Hangzhou Municipal Government and Center for China and Globalization (CCG). The West Lake dialogue serves as a platform for exchange and mutual learning on talent-led development, drawing on the diverse global perspective and insights from around the world. The forum was held at the former G20 venue in the city of Hangzhou, which is a testament to the city’s importance and rise as a base of global talent. 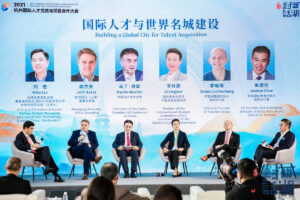 The dialogue brought together representatives of the Hangzhou municipal government, a Head of UN international cooperation and sustainable development H.E Siddharth Chatterjee, former undersecretary of State at the Italian Ministry of Economic Development and Dr Huiyao Wang, the Founder and President of Center for China and Globalization (CCG), a counsellor to China State Council and the IEC Ministry of Commerce (MOFCOM) chairman and many fellow representative young leaders from the GLYD network. During the panel discussion, the speakers shared their insights with representatives from international organizations in China, multinational corporations, chambers of commerce and scholars. They were also joined by overseas returnees and foreign professionals attending the conference.

Speaking at one of the Dialogue’s sub-forums on Building a Global City for Talent Acquisition, Gaston was joined by an excellent line-up of speakers that featured Mike Liu, a senior tech executive at DXC Technology and Infosys in Greater China, Martin Muller the Chairman of the Swiss Chinese Chamber of Commerce in China and Jeff Astle, the Managing Director of APCO and the former Managing Director of the China-Britain Business Council (CBBC). Also joining the panel was Li Lingwei, the Chinese badminton world champion and the first female to simultaneously hold the gold medals in world championships, British championships and world series Grandprix.

Gaston spoke about China’s priority and commitment to attracting and retaining global talent. He mentioned how under the leadership of President Xi Jinping, the government has been stressing the need for officials at all levels to improve the country’s ability to attract foreign professionals to work in China.

This was key to the country’s technological self-reliance and national rejuvenation. Gaston referred to the increase of Chinese multinationals investing tremendously in R&D and while Chinese policymakers have already started to promote a more global mindset and initiatives advancing entrepreneurship and innovation. 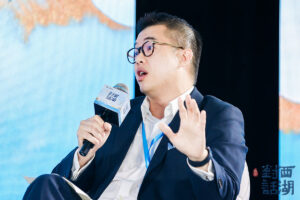 The recent years, we have witnessed an escalation of protectionism and practices that undermine the good global movement, seriously undercutting global advances in the area but contrasted how China is taking up a leading role in global leadership towards sustainable development of global talent cities like Hangzhou, a city that is sitting at the apex of global tech innovation.

Gaston also highlighted China’s excellent and streamlined visa services and the relaxing of the PR program to become increasingly accessible to foreigners is congruent with this.

A round table discussion and scenic scenes at Tonglu county

The tour concluded with a visit to Tonglu, a scenic county as the prefecture of Hangzhou. Tonglu is one of the most beautiful places in China, worthy of its UNESCO recognition. However, the county can also be on the world map for much better things. 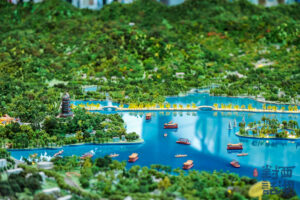 In a special round table held during the visit, Gaston praised the plans to set up in place an international tech learning hub to a whole new level, attracting home-grown and young and up-coming Chinese and foreign talents. BeGo maintains extensive connections with UK universities including Ox-bridge, LSE, UCL, KCL and Imperial and many others and Gaston shared many of these Universities would welcome the idea of setting up a campus there.

The idea of creating a global city to attract and host talent is not new to China. China has successfully done that repeatedly. However, in a time when the global appetite is weaning of anything global, to see such focus on attracting global talent is just another sign of the Chinese government’s commitment to taking a global leadership role in creating an environment for the next wave of innovations.

Gaston appreciated the invitation from CCG and GYLD and believes that CCG and its upcoming network of GYLD should make full use of events as a think-tank not only to identify and attract these talents but also to generate quality work and recommendations to the Chinese government on how these incredible talented ex-pats could be properly nurtured, retained supported to join China’s meteorite rise to a global centre stage.